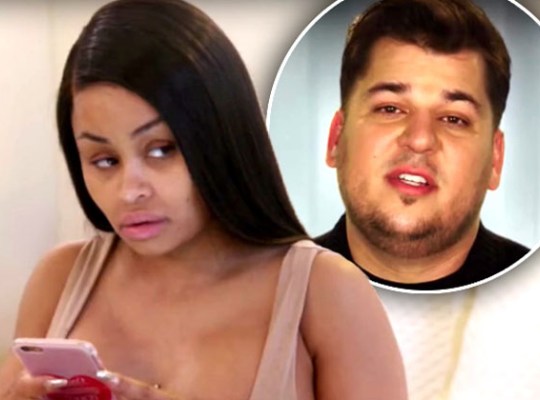 More details on Blac Chyna’s volatile relationship with her baby daddy Rob Kardashian and it may work in his favor.

Chyna, who’s real name is Angela White, documented physical abuse she suffered at the hands of Rob and claims that they have been broken up since December. She recounted a time when Rob hit and knocked her to the floor before breaking threw the door when she tried to hide from him a few months ago.

Well sources are now saying that Chyna was the violent one in the relationship, claiming that she even allegedly tried to strangle Rob with an iPhone cord.

As for Rob, sources close to the situation say in December, the day Chyna moved out of the house she and Rob were sharing, she tried choking him with an iPhone cord and tried hitting him with a metal rod. The sources say Corey Gamble walked in and pulled Chyna off Rob. She then allegedly went through the house, smashing televisions, doors and other items, causing $35k in damage. The sources say Rob has surveillance video documenting the incident.

We’re also told Rob’s lawyers have texts from the time Chyna moved out, in which she told a friend that Rob would never hit her. Our sources say they feel the messages help to vindicate Rob.