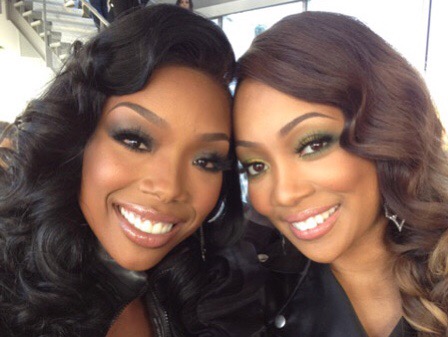 Looks like Brandy really doesn’t give a fuxk what people think anymore. You know usually she just sits back and let people say what they want about her. However, yesterday was the great Whitney Houston’s Birthday and of course you know these two have been fighting over Whitney for years.

Brandy and Monica both paid tribute to Whitney for her birthday but of course you know the fans gotta come through and get crazy putting them up against one another.

B Rocka received criticism from Monica with claims of putting the focus on herself. “Brandy is officially a egomaniac, self centered asshole,” wrote a fan named @_MaddMoneyy_. “Stop using Whitney Houston as a way to stay relevant. #ISaidWhatISaid.”

Another Twitter user named @LookAtDustin added: “There’s a BIG difference in Monica & Brandy’s posts about Whitney today. Only one of them was actually about Whitney.”

I guess they were expecting Brandy to add Monica in her tribute to Whitney which makes no sense to me. But ok.

Brandy responded, “Monica needs to really check her evil ass fans,” she wrote. “It’s so much stuff I can post about the hateful things they say to me… but I will never have time for that. Always thinking something is about her. It’s not!!!!…Me and Whitney have nothing to do with anyone but the two of us…we made history and I cared more about being with her than I did about anything else.”
“Come get your hating ass pigeons and put them in their place the way I did for you when the starz was out of place,” she wrote. “They’re low key Brandy fans anyway… always lurking and always creating new pages talking to Me. I’m not to be F–ked with today! If this was rap or hip hop you would be praised for speaking your mind but since it’s rnb you have to take the so called high road… well because I can rap just look at this as my high road.”