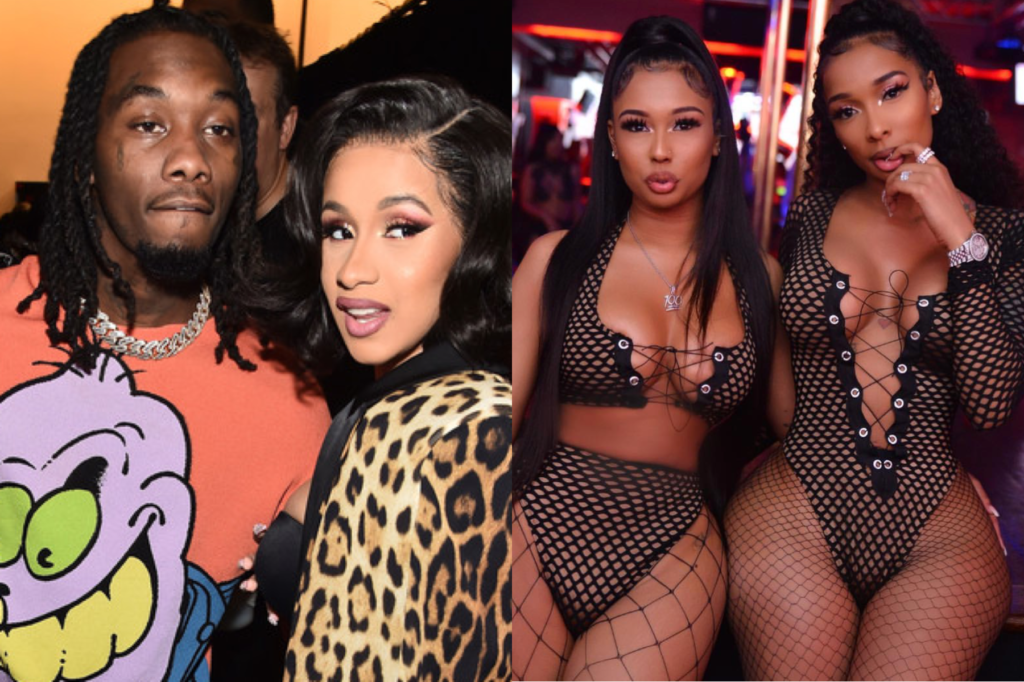 Now we all know how this started right? Jade and Baddie G claimed Cardi sent gang members including men to attack Jade and Baddie G at their job over Offset. Cardi claimed it was all lies. Now here we are pleading guilty. We will just let NY Times tell it cuz we cant understand how people be doing thenfuckery they be doing

Four years after being charged with felony assault stemming from a pair of strip club brawls, Cardi B, the Bronx rapper and pop star born Belcalis Almanzar, pleaded guilty on Thursday in a Queens court to two misdemeanors.

Ms. Almanzar, 29, admitted to orchestrating and participating in the attacks on two employees of Angels in Flushing after offering $5,000 to an associate over Instagram to help her and others confront the pair. The authorities said at the time that the victims, who are sisters, were romantic rivals possibly involved with Ms. Almanzar’s husband, the rapper Offset.

With the trial set to begin on Thursday, prosecutors said in court that they had reached a deal with the musician and two co-defendants. Ms. Almanzar agreed to a discharge conditional on 15 days of community service, as well as a three-year order of protection for the victims.

“Part of growing up and maturing is being accountable for your actions,” Ms. Almanzar said in a statement sent by a representative after the hearing. “As a mother, it’s a practice that I am trying to instill in my children, but the example starts with me.”

She added: “I’ve made some bad decisions in my past that I am not afraid to face and own up to. These moments don’t define me and they are not reflective of who I am now. I’m looking forward to moving past this situation with my family and friends and getting back to the things I love the most — the music and my fans.”

Melinda Katz, the Queens district attorney, said in a statement, “No one is above the law. In pleading guilty today, Ms. Belcalis Almanzar and two co-defendants have accepted responsibility for their actions.”

As part of her plea, which covered one count of third-degree assault and one count of second-degree reckless endangerment, the rapper was made to confirm details of the fights, which she did quietly.

Prosecutors said that on two separate nights in August 2018, Ms. Almanzar arrived at the club after 3 a.m. with others in tow. On one occasion, the group struck the victim, a bartender, pulling her hair, punching her and slamming her head into the bar. Two weeks later, they returned, throwing alcohol and bottles at the first victim’s sister, another bartender.

The original indictment in the case included two felonies and 12 charges in all, including harassment, criminal solicitation and conspiracy; the other 10 counts were dismissed on Thursday.

A redheaded Ms. Almanzar, wearing a cream-colored Proenza Schouler dress and red-bottomed Louboutin high heels, was joined in court by multiple lawyers, including Drew Findling, a prominent figure in hip-hop circles who is also defending former President Donald J. Trump in a criminal inquiry into election interference in Georgia.

Mr. Findling, known to his many rapper clients as the #BillionDollarLawyer, said on the courthouse steps following the plea deal that the resolution allowed Ms. Almanzar to move on.

“We’re talking about a life of being happily married with two beautiful children,” he said, pointing also to her charitable giving and commercial success. “There are too many things that she has planned for her family, for her career and for the community. She just felt quite honestly that a three-week jury trial was going to be a distraction.”

As for her take on his recent association with former President Trump, Mr. Findling said that the rapper, a vocal Democrat, was one of the first phone calls he got after the news broke. “She is supportive of everything I do,” he said.