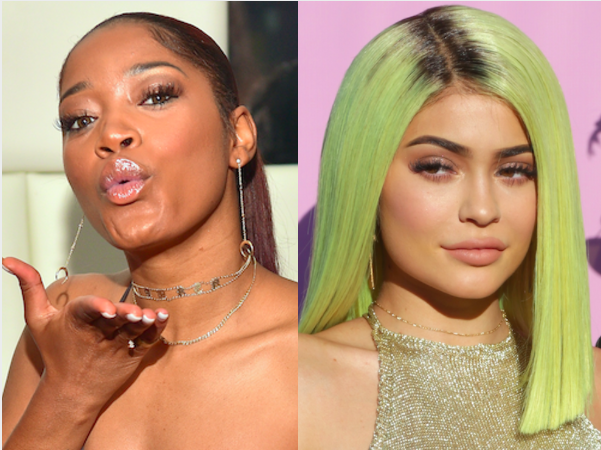 Keke Palmer is known for speaking her mind and speaking about the things that a lot of people tend to shy away from. During her interview with Yahoo! Beauty, Palmer held nothing back when talking about Kylie Jenner and the transformation that became her claim to fame.

When asked if she thought social media makes it difficult to remain your true self, she replied,

I think it’s absolutely so hard because everybody wants to make everybody so crazy, stupid, ugly, or dumb. People just become so judgmental, and it’s easy for you to be scorned by that or take those things personal when the reality is people are projecting. That’s also hard to believe, especially if you’re a kind person or want to understand where people are coming from.

So often people feel like, you know what, I’m just going to beat them to the punch and either degrade myself or be so damn perfect they have nothing to say. We’ve seen extremes of that.

In the sense of the Kardashians, it’s like I’m going to show you so much perfect and be everything a woman should be or everything a man would like or love. And I’m going to be exactly that so you can’t bully me anymore.

Specifically in the situation with Kylie, where you’ve had a young girl people have seen on television since she was a kid and they literally told her she was so ugly … the ugly person in the family. She went and did apparently everything the world deems as beautiful. The even crazier part is that everybody loves her for it.

What I find interesting is that this is something that is being displayed to my generation — showing young girls, young guys that if you do everything that society wants you to be, not only will you be praised for it but you will make money for it. You can be profitable for not being who you truly are.

That’s the thing we really have to be careful of and why I’m so honest about everything I’m going through — whether that’s sadness, happiness, depression, anger, boredom, whatever it may be. We all go through it. And I feel really grateful to be in the industry for as long as I’ve been and to have people who have been with me this long in my career and stand on a platform and say, “It’s all a gag!”

She also had a bit to say when she was asked if she ever felt pressured to change her look,

“People still try to push me there, even when I cut my hair. They said, “So why you cut your long and pretty hair?” First of all, that wasn’t all mine. And number two: because I wanted to.

This is why Brandy will forever be an icon and a legend — because she rocked braids consistently, and that was something we could cling to and look to and say, “Wow!” She sat up there as the first black singer on CoverGirl and said, “This is me, Brandy Norwood.”

For years, I was getting pigeonholed into this specific look, this Keke Palmer look. This black girl with this type of hair look. But when it gets to the point when you feel like you can’t be you without hair on the top of your head that’s not yours, that’s oppression. You’re being oppressed and made to feel like you alone are not enough.

That’s why I’m able to be happy with myself when people say, “Oh, she going crazy. She cut her hair.” No, you’re going crazy because you think I’m crazy for wanting to rock my own hair. You’re denying you. You’re not denying me.

I can still put a wig on, still rock a weave, but at the end of the day still know that this is my hair. It’s curly, it’s kinky, it’s thick, it’s thin sometimes, and I love that.

I rock my texture naturally for the world to see, and for me that is a proud moment as a 23-year-old black woman in America.”

You can read the rest of the interview here.