Nene Leakes and Kim Zolciak’s friendship is a definitely a relationship that is hard to keep up with. One minute they’re cool and then the next they’re not… and it looks like it’s safe to say for now they’re not.

Word on the street is, Zolciak is threatening to sue her RHOAco star for millions after Leakes made comments claiming that she was racist. TMZ intercepted a letter from Kim’s lawyer in the case demanding a social media apology or a face million-dollar wrath.

The letter, obtained by TMZ, references some choice comments NeNe made on social media, including, “Kim & her child did something very wrong & disgusting! Black people and roaches in the same sentence don’t work for me boo.” She then went on to call Brielle “#racisttrash” and “#KKK,” adding, “Kim & her daughter oops whole family are racists!”

The letter calls the statements “outrageous and malicious lies.”

What’s more, the lawyer says Brielle never posted the video showing the cockroaches crawling on the floor, but it was NeNe who got the video and posted it on Twitter and Instagram.

The letter makes it clear … NeNe has roaches, but it’s not racist to say that.

What’s more … the letter claims NeNe is going after Kim and Brielle out of jealousy. They have a successful show on Bravo, “Don’t Be Tardy,” and NeNe is trying to get people to boycott the program with hashtags like, #blackpeopleneedtostopsupportingtheprejudice.”

Attorney Hart wants a prominent retraction on Instagram and Twitter and other social media sites where NeNe posted her comments, along with an apology.

If that doesn’t happen … “Your conduct exposes you to multi-million dollar liability.”

It all started when Nene accused Kim and her daughter Brielle of being racist after Brielle allegedly posted a video of a roach in Nene’s home. Without mentioning Brielle by name, the reality star turned comedian posted a picture of herself with a caption,

“On the way back to the A, I fell asleep thinking about how imma live in my ROACH infested brand new home,” Leakes captioned a selfie during a flight back from a trip to Barcelona, Spain, with the cryptic hashtag #pottymouthtrashychildren as well as #jealousprejudicebitch and #blackpeopleneedtostopsupportingtheprejudice.”

Leakes then commented about Brielle with a more direct message,

“@briellebiermann We don’t have roaches! If you found 1, u brought it with u or it fell outta yo funky p—-! Please know I will get You all the way together when you start f—ing with me and mine!” Leakes wrote in the comments section.

“Go somewhere and let the air outta those fake lips, fake titties and fake ass because you will never be @kylejenner Yo trashy mama should have taught you better! My home is Brand New but you guys were so jealous of it, you couldn’t even give a compliment. You had to stoop so low and be so disgusting #racisttrash,” she concluded.

Brielle has since responded to backlash in her comment section also, 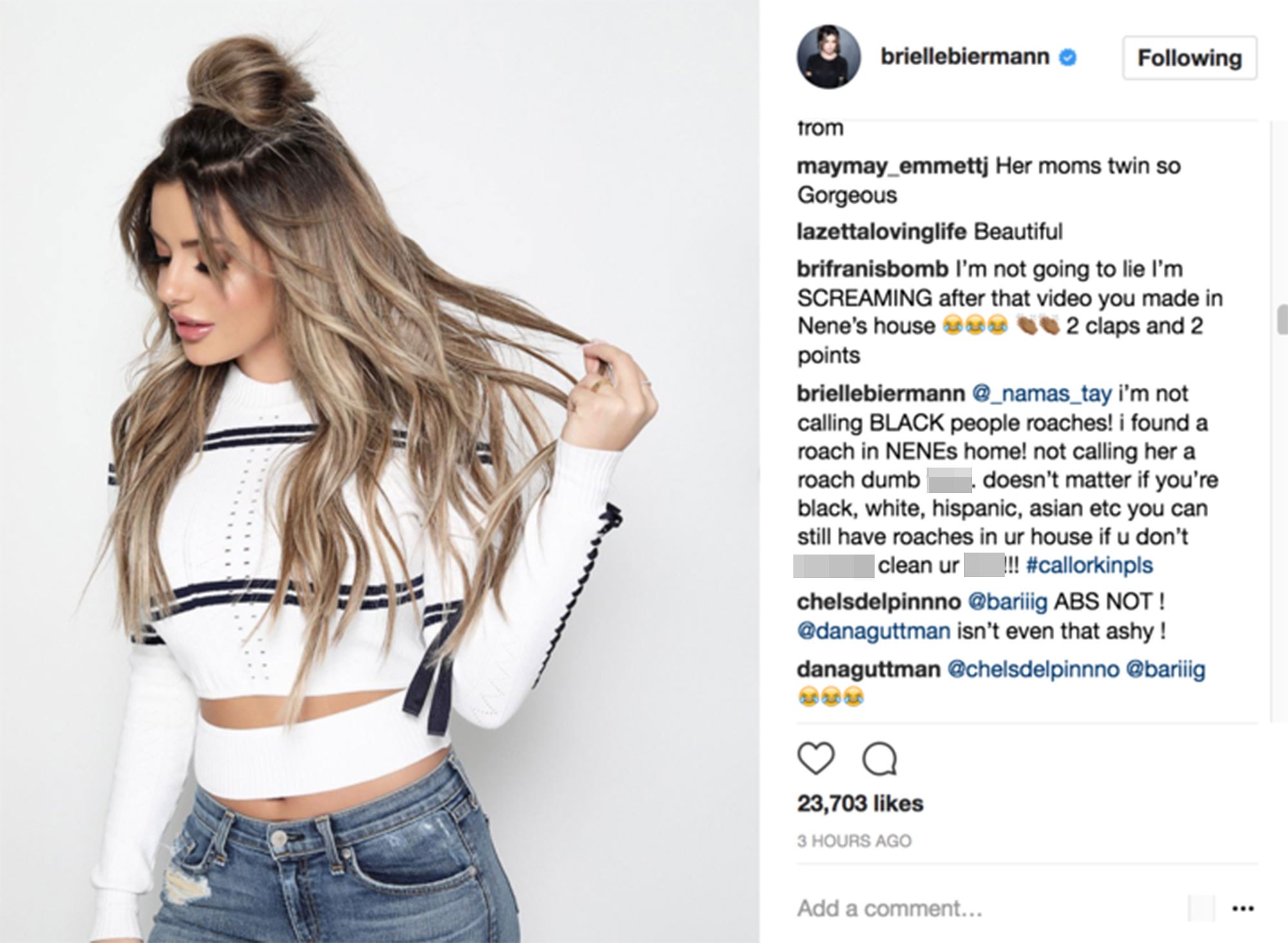 “I’m not calling BLACK people roaches! I found a roach in NENEs home! not calling her a roach dumb f—. doesn’t matter if you’re black, white, hispanic, asian etc you can still have roaches in ur house if u don’t f—ing clean ur s—!!! #callorkinpls,” the eldest Biermann child wrote.

Of course, it did not stop Nene from going on full on attack mode claiming that Kim and Brielle were both racists. 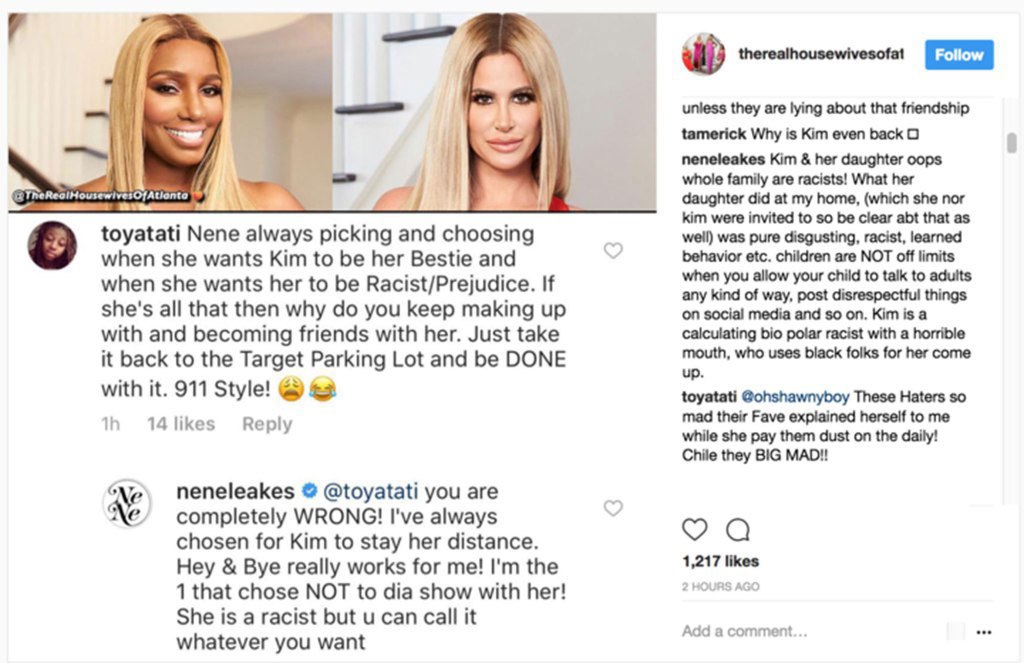 Kim has also responded to accusations, claiming that Nene leaked the video herself.

First off that video is a combination of 2 videos! I COMBINED THEM! Brielle posted the first video on snap unaware of the large bug in front of her when she was kneeling down .. until her DM's blew up! She removed the video immediately!! I was filming as an INVITED guest at @neneleakes for RHOA!! Brielle was invited as well! Brielle went to the bathroom and saw several bugs and had sent ME the video on snap and NO ONE ELSE!!! We ARE filming a show, remember that, (RHOA) and Nene released this video herself! No one has EVER seen this video but RHOA! Nobody would have ever seen this video! Nene has said and done some things that are absolutely disgusting, however I will take the high road as you will see it on the show soon enough, but you WILL NOT make it seem as though my daughter did ANYTHING wrong! She never posted this video nor would she! As you see here I myself was not willing to send the video just for ratings for RHOA. END OF STORY

At this point I almost feel sad for you @neneleakes I had hoped for many yrs you would have seen the bigger picture but it's evident you haven't, I will continue to pray for you.

Wendy Williams Defends Nelly In Rape Case,”If She Hadn’t Put Herself In This Situation This Would Not Have Happened.”