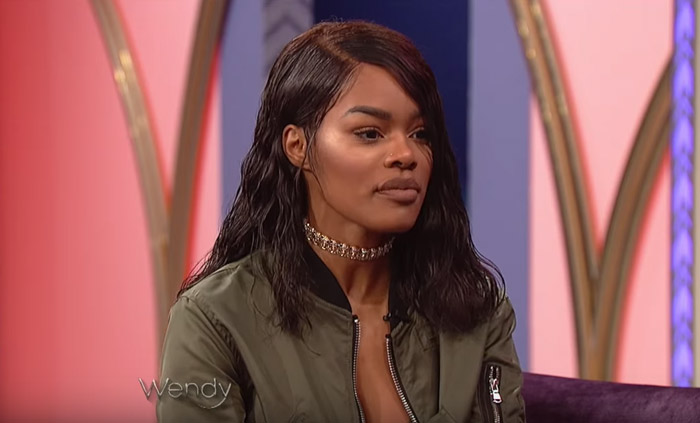 Teyana Taylor is finally getting all of her flowers for being talented. After Kanye West premiered his “Fade” at the MTV VMAs featuring the Harlem star it’s like she has blown up over night. Teyana ws today living hot topic on The Wendy show and she sat down with Wendy Williams and talked about being married to Iman, being signed to Kanye West and the night she gave birth to her baby girl Junie on the toilet at home. And yes for all of you that didn’t know, her and Iman is already married.

ON TAE HECKARD CONTROVERSY: “I ain’t seen her since. But remaining a good person and allowing myself to love again is why I am where I am.”

ON HER MARRIAGE: “I have a beautiful baby. I have a wonderful husband.”

ON DELIVERING BABY JUNIE AT HOME: “My water broke on the toilet, girl. [Iman] was trying to get me downstairs and I was like, ‘Look. We’re not making it to the car so I laid on the bathroom floor. Her head was already out…Whole body wasn’t even out. I was like, ‘Oh my God. A pair of shoulders is about to come out my vagina. I don’t know what’s going on.’ The ambulance actually [cut the umbilical cord] once they arrived, but Iman had to tie the umbilical cord with a Beats by Dre cord.”

ON HER WEDDING RING: “[Iman’s] a smart man. He was like, ‘If anything was to ever happen, that ring alone, you already set.’ I said, ‘Yes! I like your style.’ Smart man. This is an untreated ruby. Untreated is when it’s raw…So it’s worth a lot more than a diamond.”