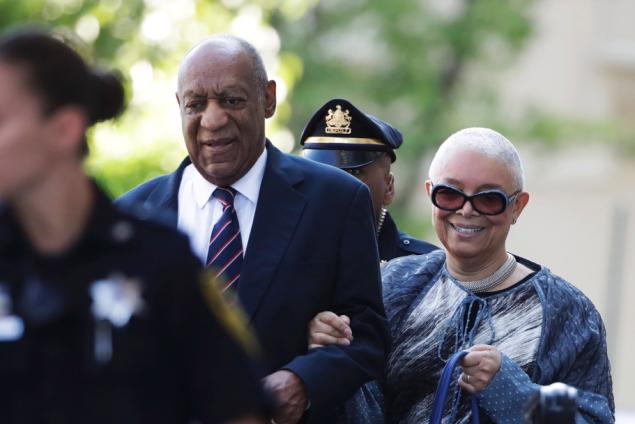 The former comedian showed up at trial with his wife Camille making it her first court appearance by his side …which also kicked off a series of surprising events.

Apparently, before the jury could even have a chance to sit, Cosby waived his right to testify.

“You have chosen not to testify?” Montgomery County Judge Steven T. O’Neill asked him.

To make things even worse, his legal team’s defense literally only lasted six minutes before basically throwing in the towel.

“I pray to God you’ll do your job better than I did mine,” Cosby’s attorney Brian McMonagle said to the jury.

“If during the course of this trial I have said or done anything that might have offended one of you, hold it against me, not him. Me — not him. I wear my emotions on my sleeve and that’s not good for a lawyer.” – via the NY Post.

Only one witness, a Police Detective who had already testified last week, was called to the stand in an effort to reiterate to the jury that Cosby’s accuser, Andrea Constand, has had discrepancies in her past testimony. Defense lawyers tried to get a second witness, Marguerite Jackson, an adviser at Temple, to the stand but the judge denied the request, saying it would be “hearsay” evidence.

Jackson, who says she and Constand were roommates who traveled together while playing on Temple University’s women’s basketball team alleges she “remembers Constand saying that she could set a rich guy up like Bill Cosby.”

McMonagle still maintains that Constand’s case is just too weak.

“This is their evidence, that they gave you,” he said. “This is why this case went into a trash can because Mr. Cosby told them everything they needed to know. ‘We laid down, we did what we normally do, I went to bed. I got up, she was up. I made her a muffin.’”

McMonagle’s outbursts seemed to be the talk the of the trial since Cosby decided to take the backseat.

“When you do things this way, it all blows up. Are you kidding me? It’s not right,” McMonagle ranted.

“I don’t care where you’re from, who you like if you think he’s the worst comedian in the world. This isn’t right. The truth becomes a lie and a lie becomes a truth. And who’s the worst off for it? He is.”

If both sides get to deliver their closing arguments today, jurors can make a decision as early as Monday afternoon cutting the predicted two-week trial extremely short.

“Be careful, be careful, a man’s life hangs on it,” McMonagle warned.

Related Topics:Bill Cosby
Up Next