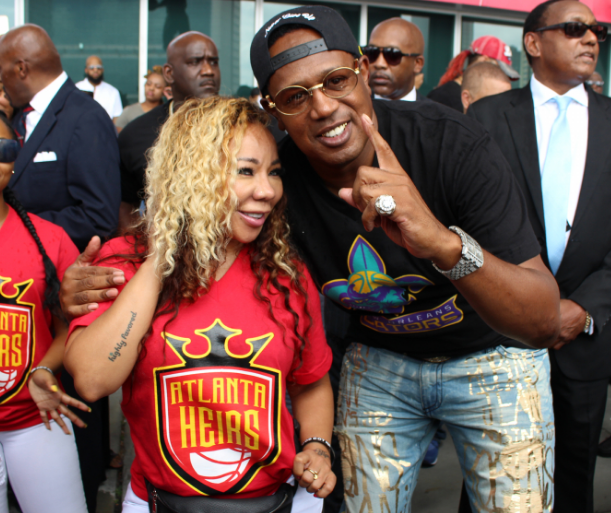 Sandra Rose has been doing what she does best and that is to start shit in the blogosphere. She recently started a rumor that Master P and Tiny have been dating on the low.

Tameka’s man is none other than New Orleans rap mogul Master P! If you don’t believe what I’m telling you, believe your eyes. Body language is everything! Master P dotes on Tiny and gives her everything she can’t get from her estranged husband. He gave Tiny a new house, and now he just gave the mother-of-5 her own basketball team in the new mixed gender league! Although she is still married to rapper Tip “T.I.” Harris, theirs is a marriage of convenience for the sake of their children.

Master P responded to the rumor,

Social media is a gift and a curse, let’s kill this body language rumor right now. No I’m not dating tiny I met her for the first time at a GMGB conference and took a picture. Just for the record we’re doing business she’s the owner of a team and I’m a owner of a team. People must be bored and have no life to entertain this false accusation. The lady that created this rumor stop it! The truth shall set you free! You owe everybody an apology. I gotta lot of respect for T.I. I wish him and his family nothing but the best.

People should use their voice for positive things like hurricane Harvey, our people need Water, Shelter, and Food. You can make a difference small or big, go to hurricane Harvey flood relief. On a lighter note Tiny Atlanta Heirs and my New Orleans Gators will go head to head on September 23 in Las Vegas she’s gonna need Shannon Brown and the whole Atlanta Hawks team to beat my New Orleans Gators! Meta World Peace The Three Headed Monsters The Gonzalez Twins! Just to name a few! Come Witness History at the Cox Pavilion in Las Vegas! It ain’t a rumor the Gators gonna beat the Heirs! #GatorPower

No Fame Junkie: Beyonce’s Pastor Confirms She’s Been Working In Silence To Help With Hurricane Relief In Houston